Ian Little is a Decent Guy...Absurd, but Totally Decent 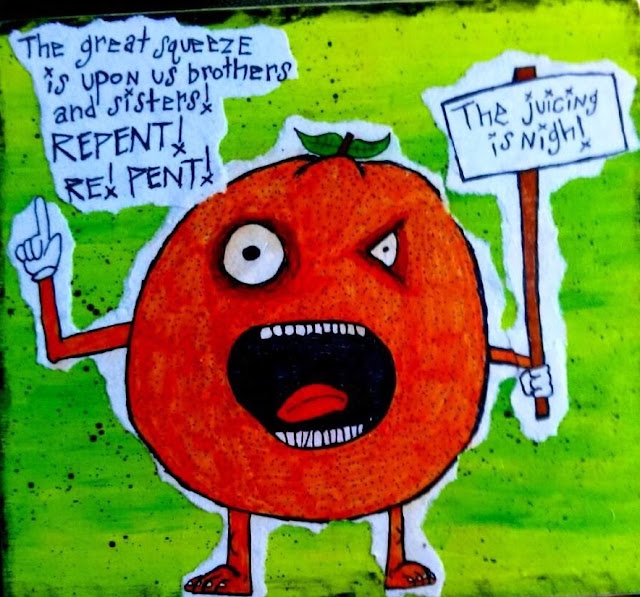 “Basically...there is only absurdity, and more absurdity.”
—Albert Camus

“Only by living absurdly is it possible to break out of this infinite absurdity.”
—Julio Cortazar

“I laugh at absurdity the hardest, then stories, then observations, then bearded men on roller-skates.”
—TJ Miller 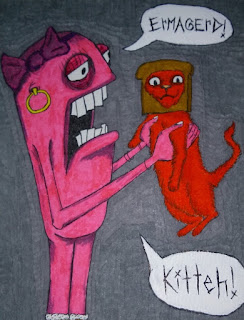 Ian Little has a thing for bread.
Bread and demons.
Now, demons are well-established in Little’s artwork. Drawn with a certain malnourished muscularity, Little’s demons are often smooth and bald, with large, vacant eyes and powerfully angular jaws wedged open by jutting rows of massive, decaying teeth—think Iggy Pop, jaundice and strung out on meth while also living with alopecia. Anyone familiar with Little’s artwork has likely grown accustomed to the demon presence, much like a Dali acolyte has similarly grown accustomed to his use of ants or a melting timepiece.
But this bread thing is different. This is new.
And, frankly, it’s a bit weird, even by Little’s standards—which is saying something.
This is the same guy who illustrated a cat being catapulted over a tiny gaggle of bewildered turkeys, drew a blue, tentacled alien giving presents to an anthropomorphized pear, and gave us a nose picking purple zombie with a fascination for two-legged goats.
All weird shit. Yet somehow not as weird as his use of bread.
It’s an issue of context, really. Bread, considered in isolation, is not controversial; however, bread considered in relationship to its appearance in Little’s artwork elicits questions—questions which, when considered from a distance, can seem ridiculous.
Take Breadcat, for example. Why is the cat’s head stuck in a slice of bread? What kind of bread is it? Does that even matter?  Why does the cat appear so happy? Did he eat his way through the bread eventually getting it stuck on his head? In other words, was this accidental? Was the bread placed on the cat’s head by the pink, human-like monstrosity that also happens to be holding and admiring said cat? If so, why? Does the bread represent mankind’s inability to walk back the madness of our present condition? And so on and so on and so on. Deeper and deeper down the rabbit-hole, until the search for answers inevitably shifts away from the content of the artwork to the artist himself.
Who is Ian Little and what is he doing to my brain?

*    *    *
Picture this:
The Titanic is sinking. The scene is chaotic. Muffled, sputtering screams rise and fall with the sea. Rivets pop and iron beams twist and fold, groaning all the while. Large husks of doomed ship fan out from the point of impact, creating an expanding field of bobbing wreckage.
Balancing precariously on floating debris is a gigantic bottle of Maple Syrup. Maple Syrup has a face. Maple Syrup has arms. And Maple Syrup is freaking the fuck out.
Why?
Because Eggo Waffle—the Jack to her Rose—is slipping through her fingers.
Desperate, Maple Syrup yells, “I’ll never leggo!”
Yup.
That’s how Ian Little’s mind works.
*    *    * 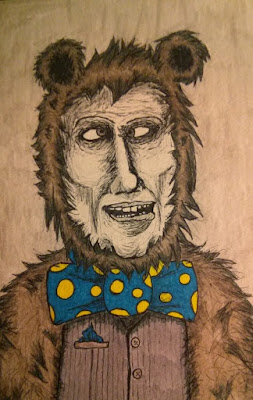 “Some of it is just sheer absurdity,” concedes Little with a slight chuckle. “When I was a kid, I really liked the movies and television shows I’d watch with my dad. It was a lot of fantasy and sci-fi, but also a lot of British comedy.”
Monty Python, in particular, made a lasting impression. Through Python, Little came to appreciate how something could be side-splittingly funny and also serve as pertinent social commentary. It was all a matter of balance—knowing when to push the profane and when to heap the folly.
Little refers to this approach as the “spoonful-of-sugar method.” Slather the bitter pill in honey. Stick a rose in dog shit. If you’re going to draw a menacingly large cyclopean behemoth, have it receiving flowers from a teddy bear. “I want people to see something ugly and find it cute,” he explains. “I want them to have empathy for the pitiful creature.”
In other words, Little is a bit of a softy—a champion of the mutant hybrids and feral underdogs. But more than that, he’s a genuine absurdist, well-practiced with a keen sense of social responsibility. “I think a joke is an important way to deliver a message and to make people look at reality less seriously, if only to then realize which part of reality is really grave.”
However—and this is important—Little is not an instigator. He does not fan the flames. Instead, he leads you to the burning house and ask, “How does this make you feel?”
Early in our conversation, Little says something which brings me pause.
“You can’t separate decency from policy or law or even art.”
My instinct is to disagree; however, technically, he is right. In fact, there is legal precedent. In 1998, the US Supreme Court upheld a ruling regarding National Endowment for the Arts v. Karen Finely, whereby a ‘decency’ clause had become a focal point of contention. Without delving too deeply into specifics, ‘decency’ as defined by the government, was found to be inseparable from the production of art and, therefore, seen as a disqualifying agent to artists applying for an NEA grant whose artwork was deemed ‘indecent.’ But Little isn’t concerned with NEA grants. His notion of decency as it relates to law, policy, and art is far more humanistic.
“Decency calls on you to act in a way that isn’t always convenient,” says Little. “If the only reason you don’t run into other cars is because the law tells you you can’t, then you lack decency.”
This is what fascinates me most about Ian Little.
Lurking beneath everything—beneath all the absurd imagery and shameless puns—is a really decent guy.
More than that even, a good guy.
On the night we spoke, Little was dropping off some artwork for an upcoming show. With him were his wife and 7 month old daughter. As I approached to make my introduction, Little held his little girl on his knee. He looked happy, peaceful. This was a guy in his element.
A father and family man before all else.
*    *    * 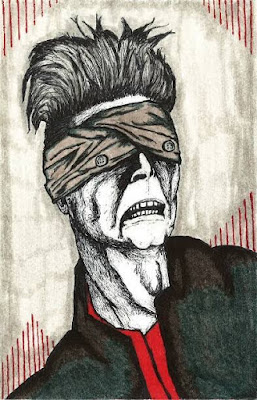 If anyone's Facebook page could accurately be considered a fluid extension of self, it's Little's.
He’s prolific. Every day brings new work—some of it finished, some not—the stage of completion having absolutely no bearing on his willingness to share. From a spectator’s prospective, it’s a very inviting and endearing practice. We are afforded an opportunity to see everything—warts and all—from a work’s inception on through to its finishing touches. And perhaps, in a sense, through this method of inclusion, much like watching a child grow and come into its own, a work can become as much ours as it is his.
And maybe Little knows this.
Maybe that’s his intent, his way of inviting us into his absurd world, by showing us its bones.
Whether we accept his invitation or not is another thing altogether, and something Little doesn’t pay much mind. “I’ll keep doing what I do because I like doing it” insists Little. “That’s all there is to it.”
“You get to paint your life anyway you want. Why not make it colorful in a way that makes sense to you?” 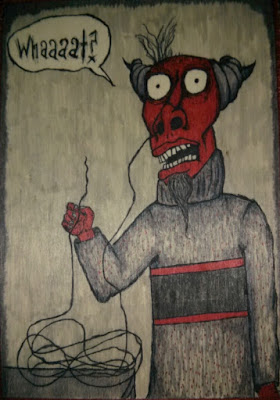 Gnarly truth, dig it or don’t: The Don’s candidacy is real.
Ain’t no denying this now (Fuck you very much, Iowa and New Hampshire). It’s a goddamn reckoning. Vacant, masturbatory prattle turned faux-gold to a vast contingent of xenophobes with twisted sideshow fetishes. Dude’s campaign seems to rumble’s unfettered across America’s anemic political wasteland like a marauding army of War Boys, begging slavishly to be witnessed.
“If responsible men irresponsibly ignore an issue…it will be taken up by the reckless,” proclaimed a recent editorial entitled “Against Trump” (2016) published in the February 15th issue of National Review. Well, shit—that sounds like the crucial trimmings to grandpappy’s age ol’ recipe for revolution.
Mercy, mercy, my! How did we come to this?
*              *              *
Ponder the Don for a sec.
Specifically, chew on his bravado. Dude’s an unapologetic primate—all barefaced harangue and dominant male posturing—chucking steamers at anyone who attempts to peacock before his radical tribe. He ain’t having it, the Don. And he ain’t sorry about a damn thing. ‘“Ballsy” is a common phrase used to describe him” (Lowndes, 2015). Unrepentant shamelessness is his greatest asset. Dude knows it too.
Apologies are for pussies.
“Trump knows his target voters... (are) not defined so much by party as by attitude and frustration level” (Calkins, 2016). Expounding on that notion even further, Trump embodies “an Us vs. Them distinction, anti-establishment plain-spokenness, deep resentment toward perceived outsiders, and perhaps most of all, rage” (Lowndes, 2015).
If a mighty slice of this country is truly craving the hefty bloviating of an impenitent and verbose mirage, choosing to embrace an illusion of toughness in hopes that that illusion will, against all odds, manifest itself into an even serviceable agent for their cockamamie notions of democracy,  they’re in sorry shape. They’re gambling on smoke and mirrors—parlor tricks.
Similar things were uttered about Obama in aught-eight. And it’s hard to argue with them now.
We doubled-down on hope and lost.
Now we’re gambling on playground tactics and rage?
*              *              *
The Orgs* love this shit.
Looooove IT!
Trump’s campaign is a finely threaded network exec’s wettest wet-dream fully realized in the flesh—he’s Kelly LeBrock to their Anthony Michael Hall. To the sensible among us, however, he is the Orgs’ very own ego-bloated Baby Huey come home to roost.
Either way, as a viable campaign commodity, Trump is the sole benefactor of the overwrought self-aggrandizing that it the 24-hour news cycle.  His message is fashioned entirely from the very foment the Orgs have spent years whipping into a frothy zeal.  The Don is simply exploiting the ever-simmering cauldron of fear and paranoia the Orgs have been slaving over since the Towers fell; appealing to a generation of registered voters brain-damaged by the incessant barrage of mosque bombings and beheadings.
This shit isn’t news anymore, its vacuous porn. And it’s irresponsible coverage.
But it’s also too late. The Don’s now dug a foothold which appears immovable. Don’t swallow the anti-Trump posturing of the Orgs, either. It’s simply another swindle. They don’t want him out of the race; Trump is ratings gold, even if he is a Golden Calf.
*              *              *
Trump’s bully tactics hold clout, but his posturing is all a construct, an artifice. All bullies are, in a sense, fictions—false personas—burying deep personal feelings of inadequacy, weakness and fear. Being unapologetic doesn’t make you unafraid, it makes you unreasonable.
And being unreasonable?
Well, that makes you dangerous—especially from a position of unparalleled power.
If we are on the brink of a radical revolution, it’s a revolution whose poster child bears all the pugnacious charisma of Biff Tannen.
We’re waiting on you, George McFly.
Where ever you are.

Posted by Unknown at 3:13 AM No comments: